The Legend of Kanazawa Curry 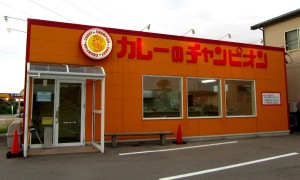 I was riding down the highway with a number of my male coworkers, when suddenly my section chief motioned out the window. “Chelsea! Have you eaten chankare yet?”

“Chan…kare?” The restaurant he’d pointed out was already behind us, and all I’d caught sight of was its dingy yellow sign.

“Chankare,” he said matter-of-factly, as if the name should require no further explanation. “Champion Curry. You’ve got to eat there if you live in Ishikawa. It’s part of the experience.”

I strained to look out the back window, but the building disappearing in the distance didn’t look like anything more than a cheap roadside curry shop. “What’s so special about Champion Curry?”

Everyone in the car tried to answer at once, but my section chief spoke over them. “It’s like this,” he said. “You look at this curry. It’s thick and black, and there’s no vegetables what-so-ever, but it’s topped with this great huge fried cutlet. You feel disgusting after eating it, and you wish you’d never even heard of chankare.”

At this, there were cries of objection, but the story wasn’t over.

“About a week later, you find yourself thinking about it,” continued section chief. “You think, ‘that curry was disgusting… but I kind of want it again.’ You can’t get it out of your mind.”

At this, his voice trailed off and his facial expression became pensive, almost wistful. Our fellow passengers nodded in agreement. And then we all had a good laugh, after which I proceeded to completely forget about Champion Curry.

That is, until I was told almost an almost identical story by a different person. My curiosity was piqued. What exactly was so special about Champion Curry? Was it every bit as black and sickening as everyone said, and if so, how is it so popular as to boast 16 locations in Ishikawa? Even with so many unanswered questions, it took me until yesterday to go in search of answers.

But before I tell you about my experience, how about some fun facts?

Champion Curry (カレーのチャンピョン – check the link for their English webpage, including loactions) was first created by Yoshikazu Tanaka, a chef trained in French cuisine who opened a western-style restaurant in Kanazawa in 1961. He renamed it Turban Curry in 1971, and in 1992 finally turned it into the franchise we know today, with locations in nine prefectures. It is representative of Kanazawa Curry, a sub-category of Japanese curry. In fact, it claims to be the origin of this distinctive curry style, which is characterized by the following:

Another Kanazawa Curry franchise, which readers might be more familiar with is Go!Go!Curry. Not only does Go!Go! have a macho gorilla befitting of such a “manly” restaurant as a mascot, but they also have shops in a wide variety of places, including Akihabara (because those single anime nerds need someone to feed them – read more here) – and yes, even New York City. Judging by the online reviews for the NY location, the flavor suits American tastes pretty well.

Kanazawa Curry is known all over Japan, and some people come all the way out here just to eat it. There are plenty of shops that sell it, but conversations with locals have instilled me with a certain sense of loyalty toward the Champion.

The orange walls of Champion Curry glow like a beacon of hope across the quiet parking lot of the Kahoku location.

So, what was my first Champion Curry experience like? We arrived just after six p.m. and were concerned to find the parking lot almost completely empty. But after snapping a few photos, we bravely ventured over the threshold and approached the ticket machine. (Many Japanese restaurants of the fast food variety use a ticket machine – you buy a ticket for the dish you want to order and pass it to one of the staff members before you sit down.) They had plain curry and rice available, but most of their dishes are topped with something: options include katsu (called L katsu here), fried shrimp, or sausage. Poached egg and cheese were also available as extras, and mayonaise is free if you ask for it. 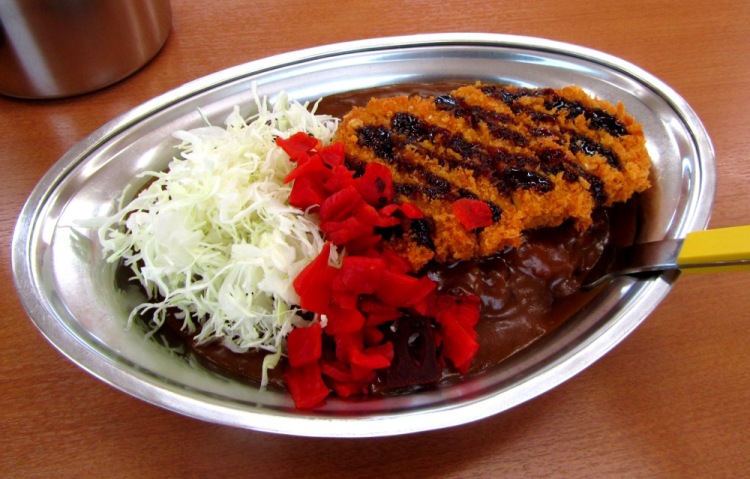 L Katsu Curry, topped with shredded cabbage and pickles, and served on the characteristic stainless steel dish. Hiding the rice underneath the curry, rather than serving the two side by side, is also distinct to Kanazawa Curry. A ton of food for 750 yen.

I know what you’re dying to ask. Was it every bit the simultaneously delicious and repulsive experience that my coworkers told me it would be? I think the answer is yes. The curry itself has a much stronger flavor than other Japanese curry, and is quite salty. Oddly, the katsu helped balance out the flavor. The meat was especially lean, which is aetypical for Japan. Even so, we went through a lot of water, but they obviously anticipate this – not only are the cups large, but the little shop boasts not one, but two water dispensers, allowing customers to help themselves. 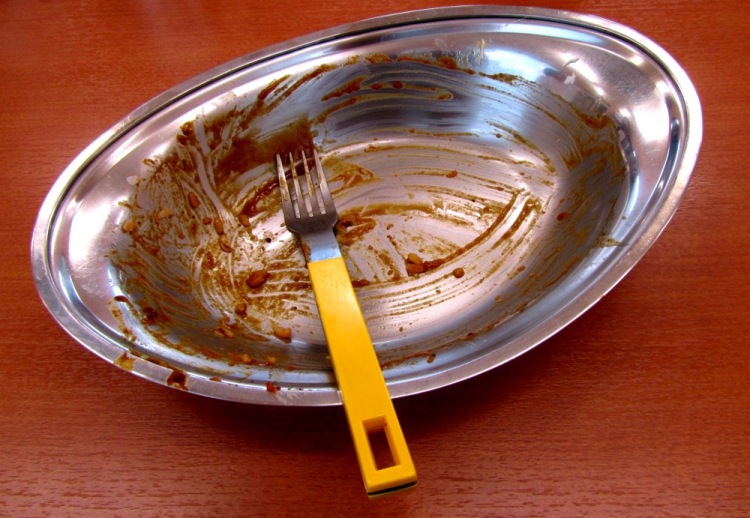 I didn't think I'd be able to eat it all, but once you start it's hard to stop. Note the fork!

Yes, we all finished. And even though we felt a little ill afterward, we still found space to try some of the new Noto “Mottainai” Gelato they were selling at Sankusu (which was pretty good, by the way.)

So folks! Next time you’re passing through Ishikawa, make sure you’re really hungry. And if you’re living in Ishikawa and haven’t been to Champion Curry yet, what in the world are you waiting for? I don’t know what they spike it with, but I can tell you that I’ll be back again.

3 thoughts on “The Legend of Kanazawa Curry”