Without reading the title of this post, do you recognize this?

If you said, “It looks like a sandy, dirty root,” you’re not far off. Renkon, the rhizome of the lotus plant, is a scrumptious winter vegetable that is popular here in Japan. But for those of us who haven’t had much experience purchasing meter-long rootstalks covered in mud at our local supermarket, first forays in renkon cooking can be a little daunting. Don’t be intimidated. The renkon, demystified, is a highly versatile and aesthetically pleasing food to work with.

I passed this lotus "field" (it's actually a shallow pond) last August on my way to Anamizu, and had to stop for some photos.

First, a few words about lotuses. Their large rootstalks live in the mud beneath the surface, sending up new leaves and buds every year. Large pink and white lotus flowers can be seen blooming above ponds and flooded fields across the country during the summer months. The ability of the lotus to transcend it’s mucky roots and produce a perfect, unmuddied flower has won this plant a venerable place in such traditions as Hinduism, Buddhism and Confucianism. 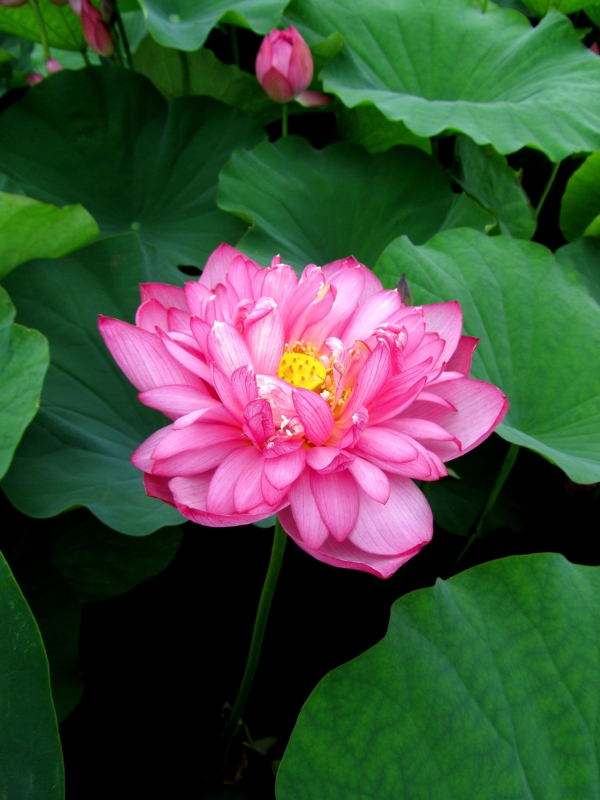 It's not hard to imagine how such a beautiful flower has captured the imagination of so many for centuries.

It’s not only the beauty of the flowers that is worthy of fascination. The lotus rhizome (what we call the “root” – probably because that sounds more edible than “rhizome” – is actually like a swollen, horizontal stem from which roots and leaves sprout) with it’s dirty skin and many segments, reminds me of some bizarre, ground-dwelling insect. Yes, it’s outward appearance may leave something to be desired, but a good wash and a cut with a knife reveals the unique and beautiful characteristic to which renkon owes it’s popularity.

The holes in a lotus root are its biggest selling point.

The holes in renkon run the lenght of each section, making each slice appear like delicate lace.

Renkon are available in supermarkets in Japan throughout the year, but they are mostly harvested in late fall and winter. Freshness is key to flavor and texture – older renkon  can be soft and bitter. Look for one that is light in color where it was cut, and appears to have light skin. While some co-ops, as well as Omicho Market in Kanazawa, sell whole, multi-sectioned renkon, they can also be purchased in single sections at most supermarkets, often wrapped in plastic on a styrofoam tray – less exciting, but perhaps more manageable.

When cooked, renkon varies in texture from soft and starchy, almost like a potato, to delightfully crisp. This texture difference has a lot do to with the age of the renkon, and the age of each segment. As a general rule, the largest segment located furthest away from the pointy root tip is the softest, while the youngest segment closest to the root tip is crisp. While it’s possible to use any part of the renkon in a number of ways, the different sections lend themselves to some preparations better than others.

With these specific uses outlined, you can see why it’s preferable, when possible, to buy a whole renkon, and cook each section accordingly. To prepare, rinse the renkon well and peel, or scrub with a vegetable scrubber. Once you slice it, consider keeping it submerged in water with a touch of vinegar, to keep it from oxidizing (renkon does sometimes turn a purplish color when exposed to air) and to remove any tannins. Boil, bake or fry until softened.

What will I do with the beautiful renkon I just bought? Tune in next week for recipes!

One thought on “Lotus Root, Demystified”