Today I want to talk a little about a particularly concerning social issue in Japan, that of the aging population, particularly as it concerns rural areas.

But because that sounds boring, and because this is a food blog, we’ll start by talking about ice cream. 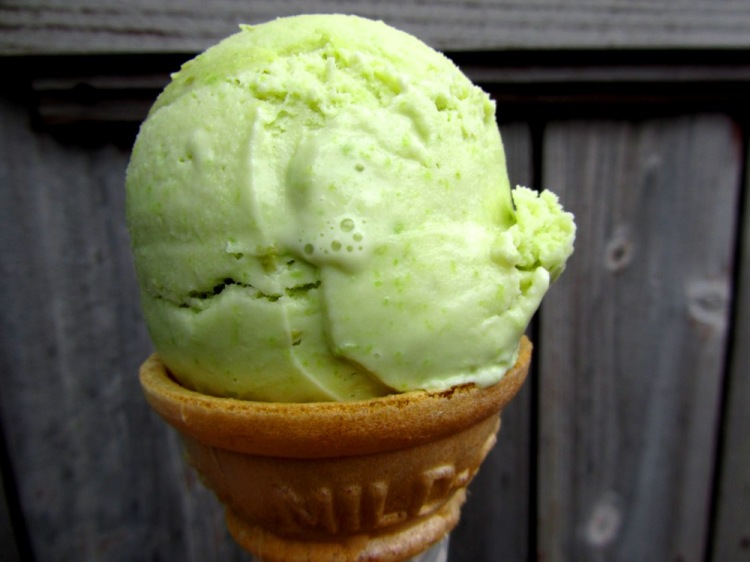 First, some background. The 770 km drive to Aomori took me about 20 hours in total. There were two reasons I chose not to cut this time in half by hopping on the expressway. First, the tolls would have cost upward of 16,000 yen one way – for that price you might as well take the train and save yourself the effort. The second, more romantic reason was this: zooming through the countryside at 100 kilometers per hour does not lend itself well to appreciation of the regions that you’re traveling through. And this brings me back to ice cream.

What does ice cream have to do with regional appreciation? Let me tell you. As I mentioned in a previous post about Aomori, every town that I’ve ever visited in Japan has at least one specialty food. Every self-respecting souvenier shop and Michi no Eki (a glorified rest stop, which deserves further attention in a later post) sells products using this specialty food. For example, a town that is known for garlic may sell garlic chips, garlic crackers, garlic salad dressing, and yes, even garlic ice cream. 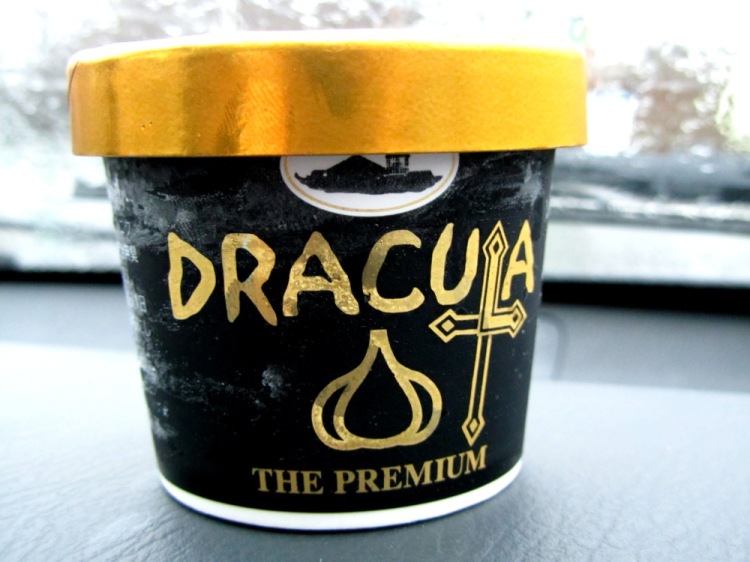 Garlic Ice Cream - 250 yen at the Shingo Michi no Eki in Shingo, Aomori

This particular ice cream came from the Michi no Eki in Shingo Village, Aomori, a town known not only for garlic production, but also for its claim that Jesus Christ himself died and was buried here – his grave is a popular, if remote, tourist attraction. (If you’re wondering, the man who died on the cross was his brother, Isukiri – Jesus himself moved to norther Japan and lived to the ripe old age of 106.) The combination of garlic with the cross motif lead to the creation of Dracula Garlic Ice Cream. It contains so much garlic that a warning on the side cautions that a full grown adult should consume no more than one container per day. Perhaps you can’t image that anyone would want to eat more than one garlic ice cream per day, anyway, but let me assure you that this stuff is actually good. Sort of like vanilla, but with this strange, warm flavor that’s difficult to describe.

Three flavors of soft serve: Apple (from Shinshuya at Lake Towada), Corn (from Noichigo in Hirosaki, near the foot of Mt. Iwaki) and Shishito Chili Pepper (from Takanosu Michi no Eki)

It’s not just Shingo. Almost every Michi no Eki we visited on this trip sold some unusual regional ice cream, in the form of frozen cups, gelato or wonderous, creamy soft serve. We tried eight varieties in all. (Let me tell you, I was definitely ready for a salad when I got home.) All of them were interesting and memorable, none were bad – and some of them were so good that I’m sad they don’t stock them at my local grocery store. Shishitou (a variety of hot pepper) was a little odd at first, with an aftertaste of Cooler Ranch Doritos, but it became mysteriously more delicious with every bite.

I think my favorite, though was scallop (hotate) soft serve at the ASPAM, the Aomori Prefecture Sighseeing Products Mansion (Aomori Ken Kanko Bussankan Asupamu) in Aomori City. Far from tasting fishy, as one might expect, it’s a good quality soft serve ice cream with that perfect balance of sweet and salty that folks look for in popular snacks like Kettle Corn. 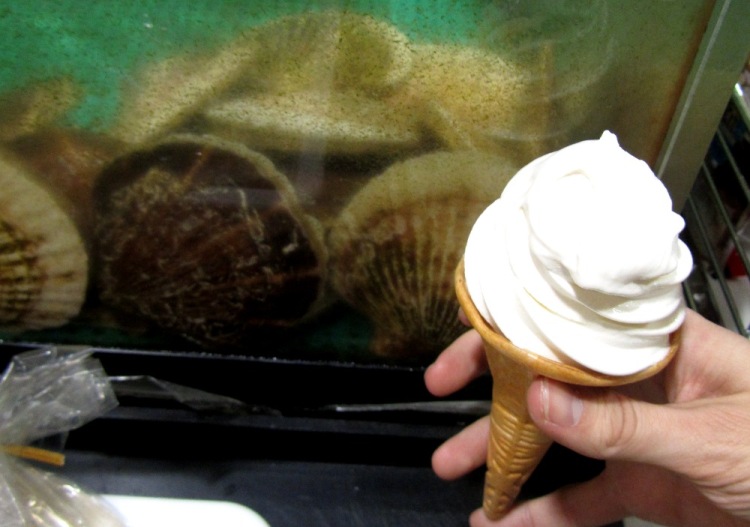 Scallop Soft Serve - it may sound disgusting, but if they sold this at my local grocery store, I would buy it again.

A Google search for “japan regional ice cream” produces a number of lists and pages about the “weird” ice cream concotions in this country, ranging from informative to somewhat insulting to the sensibilities of the average Japanese citizen. Although 101 Frightening Ice Cream Flavors from Around the World (the first 70 are from Japan) is good for a laugh, I sort of have my doubts that whoever complied this list employed a “don’t knock it ’til you’ve tried it” philosophy to his or her research (I could be wrong on this – but the koshihikari rice ice cream I’ve had has been pretty good). Not only does this encourage readers to deprive themselves of a potentially fun and unique culinary experience, but – and I realize I’m probably taking this too seriously – it also seems to be begging for readers to sigh, shake their heads and jokingly lament, “Oh Japan, you’ve done it again.” Now strange ice cream, along with quirky game shows and impractical inventions, can be added to the list of Japanese innovations that exemplify just how just how bizarre this country really is.

Or do they? Is wasabi ice cream proof of a culture that is off the charts weird, or is it actually a meaningful and delicious dessert, removed from its original context to perpetuate a convenient stereotype?

I’m no expert on ice cream, but here’s my small effort to put the weird regional ice cream phenomenon in perspective. The flavors of these ice creams are not chosen at random – rather, they often use the town or region’s specialty food. So, wasabi soft serve is sold in the mountains of Nagano, where clean mountain springs lend themselves to the production of wasabi, while scallop ice cream is sold near the harbor in Aomori City, where scallops are brought in from the sea. The flavors might seem strange, but in their very strangeness they’re actually promoting local produce and seafood.

If this still seems like a touristy gimmick designed to exploit the nation’s obsession with souveniers, please remember that in a nation where 20% of the population is concentrated in one urban area, tourism can be a matter of life or death for rural communities. The effects of Japan’s aging population are particularly apparent in the countryside, where a general tendency of young people to make for the greener fields of the cities speeds up the process of rural population decline. Economic decline follows closely at their heels.

Without those young spenders, many towns and small cities are actively looking for ways to revive their economic vitality. The process is called chiki tzukuri, or regional development, and it often involves identifying the unique parts of one’s own community and effectively marketing them to the outside. You can see where regional foods, including unusual ice cream, fall into this system. It’s a fun, novel way of introducing tourists to something that the town is proud of. Who are we to decline such an invitation?

I look forward to learning more about Japan’s regional specialties through ice cream. If you’re planning a trip in Japan, I hope you’ll keep an eye out, too. What do you say? Scallop soft serve, anyone?

« Bamboo Shoots, King of the Mountain Vegetables
The Week in Bento, Issue 1 »

4 thoughts on “In Defense of “Weird Japanese Ice Cream””